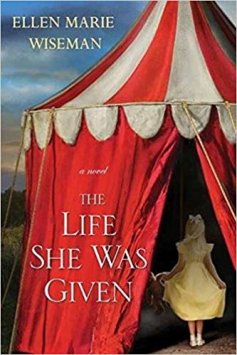 The Life She Was Given, by author,  Ellen Marie Wiseman is a fictional account of the traveling circuses of the 1930’s. The author extensively researched the subject to the point where it nearly overwhelmed the story.

However, the writing was very good and I was thoroughly engaged for most of the novel. While I’m not a fan of spoilers, there will be one here because I feel it is only fair to the reader.

The novel involves two young women decades apart, but are linked by a mysterious and tragic past.  Julia Blackwood returns home to inherit her families’ horse farm. Her parents’ kept a secret that was monstrous. The secret was about another girl, a daughter named Lily. The novel transitions from the past to the near present as Julia seeks to learn more about the mystery. The mystery involves Lily, a beautiful child who was born an albino. The mother kept her locked in the typical Victorian attic her entire young life. At the age of seven, the mother sells Lily to a traveling circus.

Lily goes from the attic prison to another sort of prison. She is owned by a brutal circus boss who uses Lily’s gift with people and her affinity for animals for years to add to his own fortune. She is kept penniless and in fear of being sent to an asylum, as was common in those days for people with disabilities. But, she is befriended by other circus “freaks” and along the way falls in love with the young and handsome Cole who works with the circus elephants. Pepper is an extremely smart elephant, and is loved by both Lily and Cole, but tragedy strikes and Pepper is horribly murdered for protecting her offspring, Jojo. Cole and Lily try to save Pepper, but both are brutalized by the circus owners.

In the end, the mystery is solved, but the ending for Lily is so brutal and so gut wrenching, I was shocked and sickened. While I don’t need happy endings, I expect, in fiction at least, a more humane ending. I rate the ending as a horror story.  So, while it is an interesting story, I say, reader be forewarned.