Though I’m not generally a fan of fantasy, this novel by Laini Taylor, a National Book Award Finalist, is an exception.  It’s her use of language that kept me enthralled.

“Once upon a time, an angel and a devil fell in love. It did not end well.”

And so begins the story of Karou, the strikingly beautiful blue-haired artist and Akiva, the vengeful angel who is the epitome of beauty. Karou’s past is shrouded in mystery,  though her present life is filled with art school and running mysterious errands for the equally mysterious Brimstone. Brimstone is, well, a chimera, a monster. But he and the other chimeras are the only family Karou has ever known.

Enter Akiva, one of the avenging seraphim angels who have been at war with the chimeras for a thousand years. Akiva has a bone to pick (no pun intended)with the chimeras. They killed the love of his life. He is moments away from bringing down his sword on Karou’s head when something about her stays his hand.

Their relationship is complicated, tangled in the mists and rife with torn alliances. Will they end the wars or will they destroy each other?

Laini Taylor takes the star-crossed lovers scenario and makes it her own. Laini’s use of language is magical. I thoroughly enjoyed the novel and can certainly see why she was a National Book Award finalist for her novel, Lips Touch: Three Times targeted for middle and high school age groups. 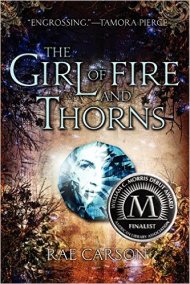 I’m enjoying the Girl of Fire and Thorns: Well written and intriguing, though a bit repetitive at times but not enough to put me off. Review coming soon.

A Young Adult Novel of Love and War 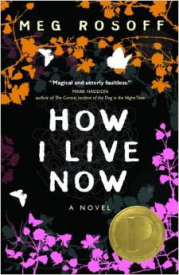 “Well to be fair, there is no way I’m believing any of this, being driven along on the wrong side of the road by this skinny kid dragging on a cigarette and let’s face it who wouldn’t be thinking about what a weird place England is. And then he looked at me again in his funny doggy way, and he said You’ll get used to it. Which was strange too, because I hadn’t said anything out loud.”

Elizabeth who is called Daisy because she’s more Daisy than Elizabeth, is fifteen, awkward, a-plain-Jane and not exactly feeling wanted by her step-mother, Davina the diabolical who got knocked-up by Daisy’s father and who Daisy will name Damian if it ever pops out. D the D (Davina the Diabolical), it is assumed, sends Daisy to England to live with twice removed relatives, her cousins and an aunt.  So, for a girl living amid the concrete boardwalk of Manhattan her entire life, the English countryside is a wonderland and Daisy does indeed feel like she fell down a rabbit hole. And the three boys are near her age and their little sister. Daisy becomes the object of their attention and in one case, devotion.

Not long after her arrival, her aunt goes on a business trip and then the war begins and the aunt is lost in the fog of war. Soon, the power fails and the farm becomes more and more isolated as the children fend for themselves. Daisy’s uncanny bond with her cousins grows into something rare and extraordinary. But war is everywhere and horribly intrudes on their wonderland. Heartrending and poignant, this story delves into the human heart and mind and how love survives even the most terrible circumstances.

This is a wonderful book for all ages.

This novel takes place in the far distant future. Space has been conquered. And humans have devised a way to alter DNA, to change humans into hybrids. Humans are caste in different roles and functions; they are designated by their colors and distinguishing characteristics. Colors cannot change or ascend the hierarchy. Darrow is a Red, the lowest of castes, a mining Hell Diver who digs dangerously deep for the Helium-3 needed for terra forming Mars. He lives beneath the surface of Mars, as he and the Reds have done for seven hundred years. They are nothing more than slaves to the ruling class, the Gold’s, who live in luxury on the Terra formed surface of Mars.

The World building in this novel is spectacular, utterly believable.

The arrogance of the Ruling Class is underpinned with all things Roman, from their mythology to their military philosophy and strategies. Peirce Brown’s weaving and interlacing of the ancient Romanesque world is astounding

.It is a brutal world where justice is swift and merciless, and politics is rife with treachery.

This is the world Darrow is thrust into after the murderous and merciless whipping and hanging of his lovely and brave young wife, Eco, all because she longed to see the stars, because she sang a song of freedom.Darrow is remade into a Peerless Gold. His mission for the Sons of Ares, the revolutionaries, is to win at the Institute, to become a Fleet Officer and take down the Society of the Gold’Red Rising is a tour de force which combines the philosophy of the ancient Roman world and which resonates uncannily with the political forces at work in the modern world. The trilogy of Red Rising, Golden Son and Morning Star is certainly the best Science Fiction series in years.Red Rising is a stunning novel, intelligent and brutal in its telling. Peirce Brown is a writer to watch and to love.